On September 15, El Salvador’s Independence Day, President Nayib Bukele announced his intention to run for president in 2024, despite explicit prohibitions in the constitution on consecutive presidential terms, setting the stage for a major national and international showdown regarding the legitimacy of the next elections. Salvadoran popular movement organizers decry the move as a brazen show of force and a disturbing reflection of Bukele’s disregard for the law and democratic norms.

The announcement came on the heels of mass protests earlier in the day, as a diverse cross-section of the population – from college students to fired public sector workers to parents of teenagers swept up in the government’s mass raids – took to the streets to denounce Bukele’s repressive practices.

Holding photos of loved ones who have been detained and signs like “Telling the truth is not a crime,” thousands marched to call for an end to the ongoing State of Exception, under which over 50,000 people have been arrested without warrants since March, and the immediate release of unlawfully detained persons and political prisoners. Among the thousands of protesters were many who continue to struggle even to locate loved ones who have been arbitrarily detained. Demonstrators also held a moment of silence to honor the lives of the over 70 detainees who have died in custody, some showing signs of torture, and to warn of the resurgence of political violence and persecution.

In El Salvador, President Bukele held his own official Independence Day parade, having usurped the march route protesters had originally announced, which organizers worried was an attempt to incite a clash. Salvadoran news outlets have reported that the government required public employees to march in his parade alongside the National  Armed Forces, the National Civilian Police, firefighters, and children from a number of schools.

Police and military had also set up checkpoints across the country, especially on routes directed towards San Salvador, which organizers say were intended to diminish the size of the protest, to promote fear among the population, and to identify suspected protestors. 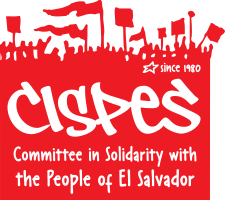 “President Bukele’s announcement that he intends to run for president again in 2024 – despite a crystal-clear prohibition in the constitution on consecutive presidential terms – can only be understood as an extreme and desperate move. It certainly seems the Bukele administration feels threatened by the real sentiments of the Salvadoran masses, of refusal of his policies, represented through successful mass protests continuing throughout this first term despite all his efforts to silence them. The President’s re-election announcement is a slap in the face to those who risked and gave their lives in the struggle to end military rule in El Salvador not so long ago.

“Unsurprisingly, we again see the United States government on the wrong side of history, continuing its close ‘partnership’ with the Salvadoran military and police. But yesterday’s protests showed that the Salvadoran people’s commitment to defending the democracy they built out of the ashes of the civil war is stronger than fear and that when we say, ‘Never again’ to dictatorship, we mean it.”