Huge crowds gather in the early morning of July 17 to show support for the Cuban revolution and its government. Credit Photo: CubaDebate.cu

The United States, a country with a $20 trillion economy, is waging a full-scale economic war against an island whose economy equals half of one percent of that — Cuba. The war has been going on for 60 years. It began shortly after the 1959 revolution to punish Cuba for taking control of corporations owned by rich capitalists in the United States who had brutally exploited the Cuban people for decades.

Supporters of the Cuban revolution call this economic war a blockade, not an “embargo” like the corporate media. That is because the U.S. government is not only preventing its own citizens and businesses from trading with Cuba, it also prohibits trade with foreign entities that also do business with Cuba. In essence, the United States makes companies choose between doing business in the United States’ 20 trillion dollar economy or in Cuba. Here are six ways that this cruel blockade profoundly impacts the lives of the Cuban people.

While one of the top priorities of the Cuban government is achieving food self-sufficiency, for now it must import 70 percent of its food. Washington considers this a point of vulnerability.

Keeping Cubans hungry is viewed by the United States as a chief weapon in its arsenal. From 1962 to 2000, the United States outright banned the sale of U.S. food to Cuba. In the early 90s, when Cuba lost its Soviet and Eastern European socialist allies, Washington smelled blood and tightened the blockade, through the Torricelli Law of 1992 and the Helms-Burton Law of 1996 The intended result was malnutrition on a grand scale. Caloric intake on the island dropped by one third during that decade. Against all odds Cuba survived and found new sources of food.

With the U.S. strategy of starving the island into submission failing, and with U.S. agribusiness pushing for normalization with Cuba so they could enter its market, the U.S. finally created an exception in 2000 allowing certain sales of food. The catch: Cuba would be forced to pay “cash in advance.” No other country is forced to deliver cash before the goods can even be loaded onto a ship. With U.S. food sellers prohibited from extending credit to Cuban buyers, the purchase of large volumes of food is difficult and sometimes impossible, making the U.S. market inaccessible. Cuba is thus forced, by design, to pay higher prices in more geographically distant markets. From April 19 to March 2020 (pre-COVID), the additional cost to Cuba was $430 million.

The United States pursues its policy of starvation in other ways: it uses the blockade to kneecap Cuba’s agricultural sector, standing in the way of its ability to become food self-sufficient. The U.S. blockade translates into a chronic lack of machinery, spare parts, fertilizer, fuel, materials for irrigation and other technologies needed to improve farming. As a result, Cuba cannot reach its full farming potential.

More than half of Cuba’s arable land remains uncultivated due to shortages. Cultivated areas often rely on humans and animals to do the plowing and other work instead of machines, drastically reducing crop yields and productivity.

In 2019, the Trump administration adopted new measures to disrupt Cuba’s oil supply, vigorously tracking and sanctioning companies and ships around the world that transported fuel to Cuba. Twenty-seven companies, 54 vessels and three individuals were sanctioned for the “crime” of supplying fuel to Cuba, none of them of U.S. origin or under U.S. jurisdiction. That year, because of fuel shortages, Cuba was unable to plant 12,399 hectares (30,639 acres) of rice, meaning 195,000 tons of food went unproduced. Almost 500 tons of meat went uncollected. 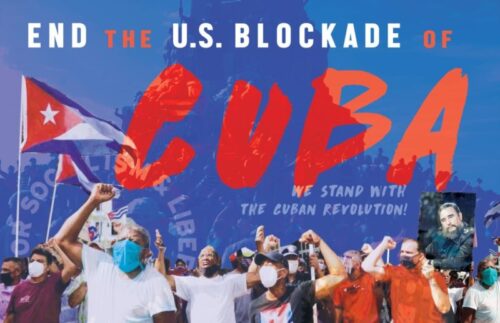 The Trump administration re-added Cuba on its spurious list of countries “that sponsor state terrorism.” This is an outrageous lie aimed at tarnishing Cuba’s reputation around the world and further discouraging trade with the country. In fact, when it comes to which country sponsors terrorism it is the other way around.

Cuba’s people gave suffered 3,478 deaths from U.S. sponsored terrorism, and 2,099 people wounded. The charge that Cuba refuses to cooperate with the United States in fighting terrorism is shown to be false especially in the case of the Cuban Five. The Cuban government gave the United States information that five Cubans had gathered about Miami-based terrorists. The U.S. arrested the Cuban anti-terrorists, subjected them to a kangaroo court and imprisoned them for up to 16 years.

Cuba’s preventative, community-oriented, universal health care system is not only world renowned, it is also a primary target of the U.S. blockade. From 1964 to 1975, the U.S. forbade all sales of medication, medical equipment, supplies and technology to Cuba. Beginning in 1975, special licenses could be granted by the U.S. government on a case-by-case basis. However, to get a special license, you have to go through the Treasury Department, the Commerce Department, the State Department and finally the Defense Department. A third party would then have to “verify” the goods’ arrival and use in Cuba. This is the policy today. In practice, no major medical companies in the United States are willing to go through this process. It is a virtual ban.

Cuba tries to look elsewhere, but the U.S. blockade restricts other countries’ medical products as well. If a medical product is made outside of the United States, but over 10 percent of the value of that medical product derives from U.S.-originated parts, components or technical processes, then the United States forbids the sale. If the sale happens, there will be repercussions for the seller. Because U.S. pharmaceutical and medical monopolies dominate the global market, Cuba’s access internationally to most medicines, supplies and new technologies is cruelly denied.

For example, state-of-the-art hearing aids and other equipment designed to help people in the hearing-impaired community, like light bells and alarm clocks that vibrate for parents when a baby cries, are unavailable in Cuba because they have too many U.S. “components.”

The policies are even crueler in the context of the COVID-19 pandemic. When Cuba tried to purchase life-saving mechanical pulmonary ventilators from two Swiss companies, IMT Medical AG and Acutronic Medical Systems AG, they were refused. Cuba had done business with them before, but a U.S.-based company bought them out, and now due to the blockade all commercial relations stopped. 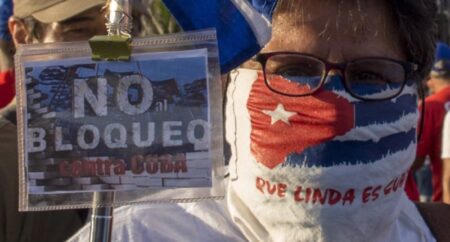 Another main target of the U.S. blockade is Cuba’s banking and financial operations. To avoid U.S. fines and retaliation, foreign banks and financial institutions often refuse to process Cuban transactions or provide other services.

The primary system powering the world’s high-speed transactions between banks is a giant, U.S.-dominated financial messaging network called SWIFT (Society for Worldwide Interbank Financial Telecommunication). SWIFT is how banks in one country transfer money to banks in another country. Forty percent of global transactions through SWIFT are in U.S. dollars. They must be cleared through U.S. banks, which gives the United States legal jurisdiction over them.

That means the United States dominates nearly half of all international transactions, and can use that position in the service of its foreign policy, including blockading countries. Thus, Cuba’s efforts to carry out financial transactions with third-countries through SWIFT are usually unsuccessful, making the simple task of paying for things enormously complicated.

In addition to this, in 2019, the U.S. government amended the Treasury Department’s rules for enforcing the blockade, affecting another kind of financial transaction: remittances. Remittances that are sent to Cuba by family members living in the United States constitute a major source of income for the country. Washington’s new restrictions are designed to cut them off.

Remittances are capped at $1,000 every four months. Remittances to non-family members have been terminated. Washington then put Fincimex, the Cuban financial institution which receives family remittances, on a blacklist, which means U.S. banks are prohibited from sending remittance payments to it. This move caused Western Union, the only U.S.-to-Cuba provider of remittance payments, to shut down its 407 locations across Cuba.

The U.S. blockade, geared as it is towards bankrupting the Cuban state, targets tourism with special intensity because it is the country’s second-leading source of income. Tourism generates 500,000 jobs, or about 1 in 10 jobs. Prior to the disruptions caused by the coronavirus pandemic, when the Cuban government made a public health decision to suspend tourism, Washington was busy imposing new measures under the blockade to crush that vital industry.

In 2019, the U.S. government unveiled rules that end almost all non-family travel to Cuba, including “people-to-people” travel for educational and cultural reasons. Cruise ships, private and corporate aircraft, sailboats and fishing boats are prohibited from going to Cuba. Commercial and charter flights have been suspended to every city except Havana. In 2019 before the pandemic, 4.3 million tourists traveled to Cuba. In 2020, only 1.08 million visited the country and in the first six months of 2021 only 125,000 tourists arrived. For U.S. visitors who managed to enter the country, the U.S. government beefed up its blacklist of Cuban entities where it is illegal to make purchases and included 400 hotels as well as privately owned residences. All of this is designed to keep dollars out of the hands of Cuba.