CISPES is honored to welcome two powerful, courageous leaders of the Committee of Family Members of Political Prisoners of El Salvador (COFAPPES) to Washington, DC for a special community event this Saturday, June 25 at 2:30 pm at St. Stephens Church (our first in over 2 years!). We hope you can join us!

As you may have been seeing in the news, El Salvador is undergoing a human rights emergency after President Bukele imposed a State of Exception and suspended constitutional rights at the end of March. Over 38,000 people have been arrested without warrants, and there are over 1,000 reports of arbitrary arrests and other human rights violations. 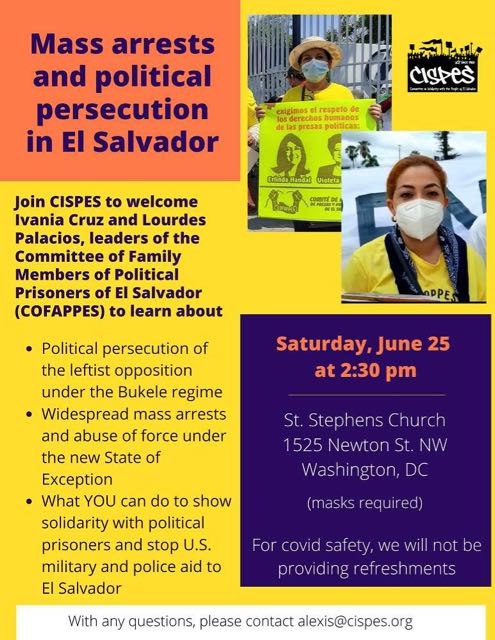 But the use of unlawful arrests, including to target political opponents, far predates the State of Exception.

There are currently nearly 40 members of the leftist opposition, from community organizers to former cabinet members from the FMLN governments, who are either in prison, under house arrest, who have had to flee the country under threat of arrest or were already in exile, though no evidence has yet been presented in any of the cases.

The Committee of Family Members of Political Prisoners of El Salvador was formed last year to support and free their family members. Please join us to learn what you can do to support political prisoners in El Salvador today and the important role of international solidarity, including to end U.S. police and military assistance and training to El Salvador and throughout Central America.