The Fundación Pablo Athugarry in Miami is pleased to present Abstracción Eterna (Eternal Abstraction), an exhibition of drawings, paintings and sculptures by one of the most important living Abstract Geometric artists from Colombia, Jorge Riveros. Founder and sculptor Pablo Atchugarry, a devoted collector of work by pioneers of Geometric Abstraction in Latin America such as José Pedro Costigliolo and María Freire, welcomes Riveros to the Miami Fundación to pay homage to a prolific, living legacy. Jorge Riveros (b. 1934, Ocaña, Norte de Santander, Colombia) began as a figurative painter, as this was the dominant style of painting in Colombia at the start of his career. From 1951 to 1956 he studied at the National University, earning the titles Master in Painting and Professor of Drawing. 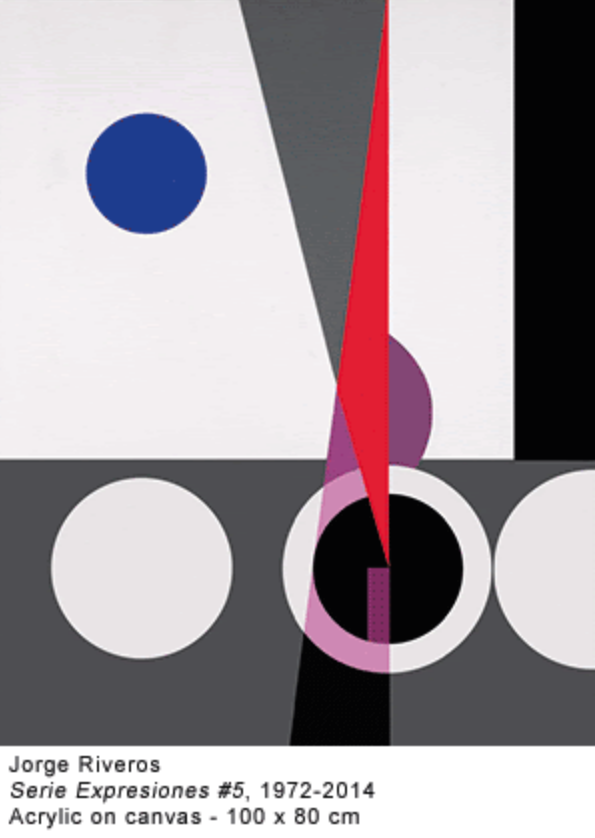 The public opening reception of Abstracción Eterna will take place Saturday, April 10th from 6pm to 9pm at the Fundación Pablo Atchugarry in Miami. The reception is free and open to the public, with tickets available on Eventbrite.

To ensure public health and safety of attendees, tickets will be limited to a maximum of 100 guests each hour.

As a student in Colombia, Riveros read the book ‘El Universalismo constructivo’ by Joaquín Torres García (Uruguay, 1874-1949). The book catapulted Riveros to explore abstraction, and also became of great influence for the development of his ‘constructivist’ works from the late 70s to the 90s. He became increasingly fascinated in abstraction while living and working in Germany in the years 1965 to 1975. Riveros returned permanently to Colombia in 1975, with a new vision of geometric abstraction that combined the influence of Bauhaus painters with elements of indigeneous art of the South American continent. The artist’s hybrid perspective due to his time in Latin America and Europe parallels that of Pablo Atchugarry, who was born in Uruguay, studied in Italy, and returned home with a combined set of tools for abstraction.

Abstracción Eterna will present drawings, paintings and sculptures from the 1960s to 1970s, following his journey through Abstraction, Constructivism and Geometric Abstraction. These early investigations made by Riveros will be shown in tandem with paintings made as recently as 2017 from sketches the artist made during his time in Germany. In addition, the exhibition will realize a 1973 concept by Riveros for the first time as a large-scale mural. Activating the exterior of the Gallery building, the mural will serve as 5520 NE 4th Avenue’s first public artwork. Throughout his career, Jorge Riveros has devoted himself to maintaining the golden mean or golden ratio as his defining aesthetic principle. Abstracción Eterna explores the scope in which this aesthetic principle is applied through various mediums, colors and forms to generate a harmony that transcends language itself.

Fundación Pablo Atchugarry is a non profit institution, founded in Manantiales, Uruguay in 2007 by the sculptor Pablo Atchugarry. In December 2018, the Fundación Pablo Atchugarry opened its second location, in a space adjacent to the Piero Atchugarry Gallery, in the neighborhood of Little Haiti, in Miami, FL, located near Miami’s Design District. The exhibition program combines both contemporary and modern art, to bring a refreshing look at art history and to foster an understanding of how art movements can influence each other through time and space.